Investors have had plenty of market-moving Federal Reserve news to digest this week: Janet Yellen apparently is a shoo-in as the next Fed chief after Larry Summers dropped out of the running, while Ben Bernanke kept monetary policy on hold for now by not tapering quantitative easing (QE) yesterday.

So what does all of this mean?

For one, elevated volatility in securities prices, as we’ve already seen. But here’s the most important take-away: Don’t get fooled by the knee-jerk reaction in stocks, bonds, commodities and the dollar. On days when key economic news is released, whether it’s a Fed meeting, jobs report or gross domestic product, the initial market reaction is often a head-fake.

It’s best to wait a few days, even a week, to determine if an actual shift in a market trend is under way. That said, I’m going to focus today on one high-profile market that’s overdue for a short-term trend reversal: Treasury bonds.

Borrowers including prospective home buyers, businesses and consumers are already suffering sticker shock as interest rates have surged in recent months. And I believe they’ve risen too far, too fast, and are due for reversal, meaning lower interest rates and higher bond prices.

To put that in perspective, consider that the average rate on a 30-year mortgage jumped to 4.8 percent recently from a low of 3.3 percent in May. That’s a 45 percent increase.

As a rule of thumb, every 1 percentage point increase in home-loan rates translates to a 10 percent drop in housing affordability. And that, of course, has a multiplier effect throughout the economy, reducing consumer spending on cars, at retailers and the like.

That tells me the Fed — with or without Bernanke at the helm — is likely to move slowly on tapering as we learned today cautiously gauging the impact on the economy.

Let’s face it: The Federal Reserve doesn’t need to do tapering, or reduce its bond buying. By talking publicly about a slower pace of bond purchases in June, Bernanke has already sent 10-year Treasury yields soaring.

Investors not only got the message loud and clear, but appear to have over-reacted.

The irony is that the Fed’s expressed intent in launching multiple rounds of QE since 2009 was to hold down long-term interest rates and promote job growth. Instead, interest rates have surged, investors have experienced the biggest bond market selloff since 2004 and banks are cutting thousands of jobs as demand for loans weakens.

Four years of hard work by the Fed … and all that taxpayer-funded bond buying … and nothing to show for it.

What’s the likely effect on bond markets in a post-tapering world? It may surprise most investors because we have seen this movie before, and it has an unexpected ending. 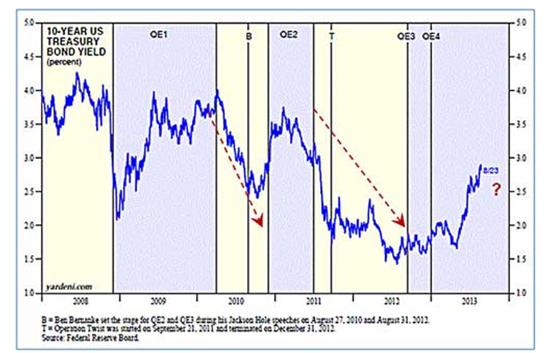 Each time the Fed has reduced or removed quantitative easing over the past four years, bond markets have reacted by rallying, with yields falling, as shown in the chart above. That may seem counter-intuitive. After all, fewer purchases by the Fed should mean lower prices and higher yields. But in reality, the exact opposite happened every time.

QE1, the first round of quantitative easing, ended in March 2010, and 10-year Treasury yields were just over 4 percent at the time. They declined to 2.5 percent before the Fed launched QE2 in November 2010.

When the second round of bond buying ended in June 2011, 10-year yields were above 3 percent, and steadily declined over the next three months to less than 2 percent when Operation Twist began in September.

Treasury yields were again below 2 percent when QE3 was launched about this time last year. And now, as tapering heralds the beginning of the end for QE3, yields are back up near 3 percent. Do you see a pattern here?

The reason: After each round of QE ended, investors reasoned (correctly, as it turns out) that the economy would inevitably slow again in the absence of stimulus, resulting in lower bond yields. And eventually another round of QE to help the economy avoid stall-speed would be needed.

Rinse, lather, repeat! This picture has played in a continuous loop since 2008.

Granted, it could be different this time. The U.S. economy may finally be ready to stand on its own two feet without the need for monetary stimulus and accelerate from here, despite the headwinds that higher interest rates are already inflecting both at home and abroad. Call me skeptical.

Historically, when key economic data points fall below a 2 percent growth rate, the economy is stalling and at risk of recession within a year. They include:

* GDP, which is expanding only 1.6 percent annually …

* Real consumer spending, which is growing at an annual rate of 1.7 percent.

These are the terrible-two indicators for the U.S. economy. And the graph below shows our economy remains perilously close to stall-speed right now. 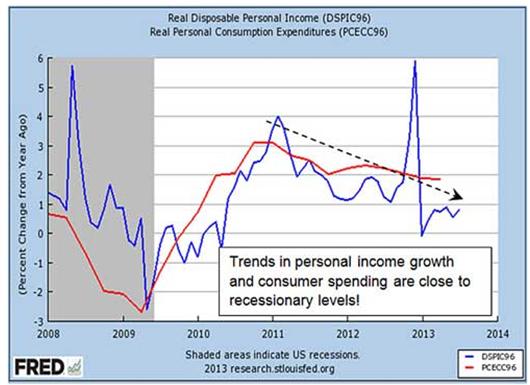 This leads us back full circle to the hubbub over Fed tapering. Does tapering really mean tighter monetary policy? I don’t think so, but to understand why, recall that in past business cycles the Fed usually begins tightening monetary policy because the economy is growing too fast.

The Fed overreacts to the threat of accelerating inflation by hiking interest rates too quickly until growth gets choked off, the economy contracts, and then interest rates fall again.

The current cycle is quite unique in that the Fed has gone out of its way to be ultra-accommodative in holding the Fed funds rate near zero since 2008 — even adding multiple rounds of QE for good measure —  and still our economy remains near stall-speed.

Judging from the dismal economic data shown above, there isn’t much risk of the Fed tightening rates too soon this time around. In fact, the Fed is on record saying it won’t even consider raising the fed funds rate until unemployment is below 6.5 percent, down from 7.3 percent now.

I expect the Fed to eventually follow its widely telegraphed tapering plan by reducing asset-purchases only gradually until QE3 completely winds down by next summer, just as Bernanke has stated.

But even when tapering finally begins, it’s not the same as tightening, and interest-rate increases are even farther away. If that’s the case, and economic data remain soft or take a turn for the worse, then 10-year Treasury yields near 3 percent look too high in the near term.

Another global-slowdown scare would hit the replay button on the same old picture show we’ve seen since 2008. Recession fears, perhaps from Europe (again), emerging markets or even weaker-than-expected U.S. growth, could easily send bond yields lower again as rumors surface of another round of QE from the Fed.

Ben will be a tough act to follow. I wonder what Janet Yellen has up her sleeve?